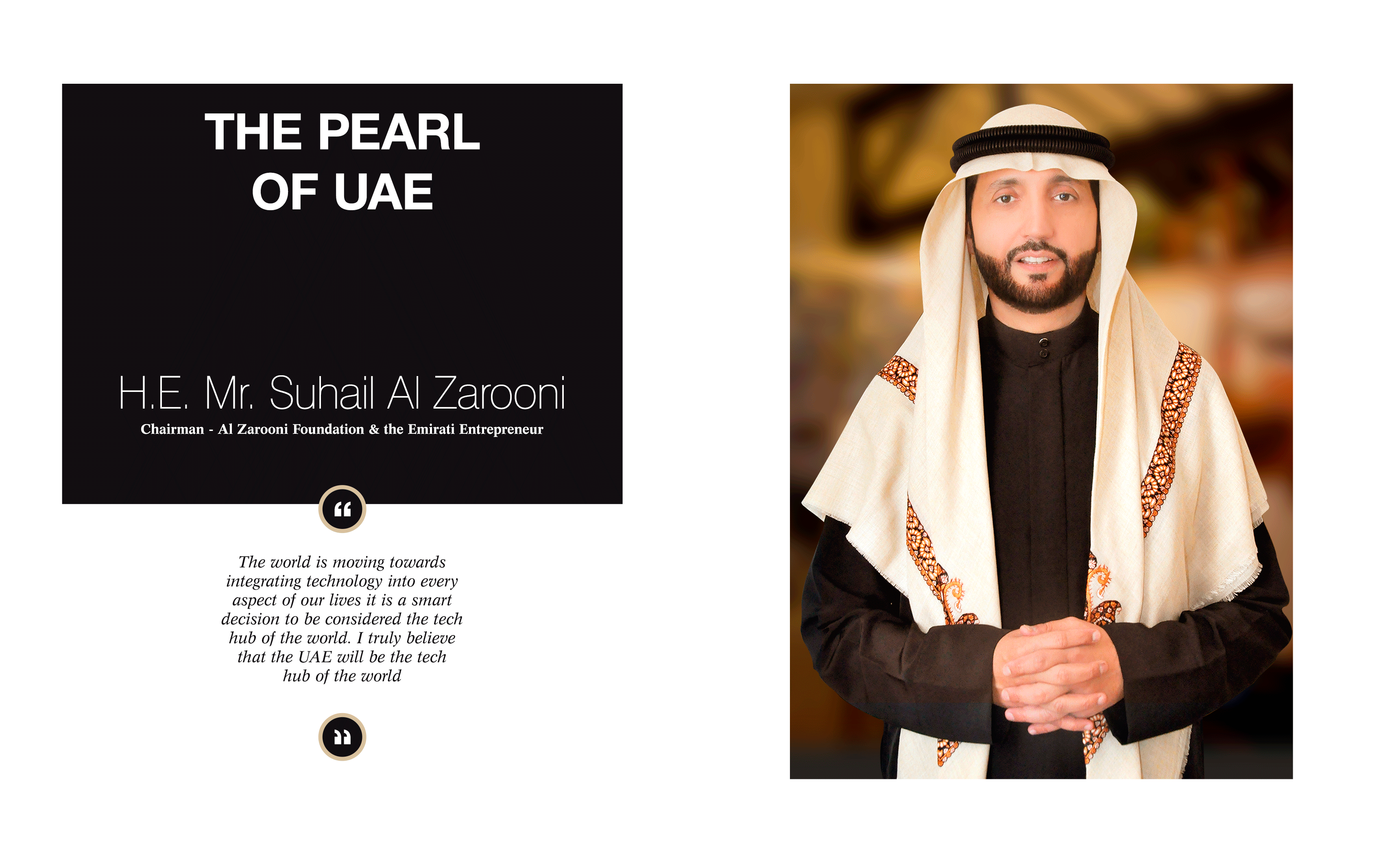 EVOLVE: Your passion & love for Model Cars has made you a legend among model car collectors by having a collection of over 20,000 model cars. When did you begin your journey and what was the inspiration behind it?

H.E. Mr. Suhail: My passion for collecting in general started at the age of 7. I started to collect antique stamps as a hobby; it was a very popular hobby amongst my school colleagues at the time. From collecting stamps, the hobby evolved into collecting dinky toy cars. I would have the cars place nicely on display without ever playing with them.

EVOLVE: The UAE has a well-regarded ‘ease of doing business’ ranking, continuing business legislation improvements and a maturing market. How successfully Suhail Al Zarooni Group made an appearance in fast paced business industry?

H.E. Mr. Suhail: The success of Suhail Al Zarooni Group is partially due to the UAE. The UAE has made it abundantly simple to start a business, by offering people the proper tools and procedures to properly prompt up their business. The UAE has successfully helped multiple people to create successful businesses, and this success is shared with people of multiple nationalities, not just with the locals. One other aspect that I believed played a part in the group’s success, is the knowledge and experience of the people working in Suhail Al Zarooni Group.

EVOLVE: You are also actively participating in charitable projects since 2011. Please tell our readers about some of your major projects under Al Zarooni’s first non-governmental organization?

H.E. Mr. Suhail: I have many charitable projects that help people in need. Most of the projects deal with aiding people in need. One such project is to provide people with the important necessities that are need by every living human being, such as providing personal hygiene facilities, potable water, and most importantly education. Al Zarooni foundation has also provided schools and hospitals, as I believe that what these people lack the most is ability to thrive on their own. If we teach them and provide them the necessary foundation to improve, I with the utmost certainty believe that they will.

EVOLVE: Al Zarooni foundation aims to provide healthcare, safety and security to children, women in need through its various projects in Pakistan and to the other sectors of the world. What challenges and hindrances you had faced in this journey?

H.E. Mr. Suhail: The biggest hurdle that the Al Zarooni foundation has faced is the issue of abusive substances that has been contrived onto the youth. It is a real challenge not only to help the youth, but to ensure that they would not regress back into their old habits. I believe that the real challenge is a battle of mentality more than the “War against Drugs”. This is because some people would rather corrupt the minds of the youth for profit instead of looking at the harm that they cause. These people have lived their entire lives believing that this is either the only way or easiest way to make ends meet. Once that type of mentality has settled into their minds; it is difficult to forget or to change that thought process. It can also be dangerous to oppose that view in a life-threatening way. We are trying to help these people that abuse and distribute these substances to give up on that mentality, but sometimes they don’t view us as helping and instead as people that try to abolish their way of life and livelihood. Nevertheless, we still have to try and succeed because those youth are the future.

Evolve: Think Green Awareness initiated to explore and preserve environment. How far is this project successful in achieving its goals?

H.E. Mr. Suhail: Well, the think green awareness campaign started about 10-12 years ago. However, I feel it is far from reaching its goal. It might actually take a bit longer, I believe. The reason for that is that people need to start taking steps to preserve the environment. It isn’t enough anymore to run a campaign telling people about the issues of our environment and how to save it. In this day and age, people already know the issues and the necessary steps to take to preserve it. I believe that some people are unmotivated to try, it might be because they didn’t want to believe in the situation, or they couldn’t find an alternative, but I believe that might be changing. We can see that with the demand for electric cars and the demand for renewable green energy.

EVOLVE: Apart from Model Cars, you love to collect anything that sparks your interest that’s why you have huge collection of nice items in more than two dozen of product categories for which you are making your own private museum too. What kindles the idea of collecting a particular product category in your mind?

H.E. Mr. Suhail: As a collector it is difficult to pin point what exactly piques my interest in regards to the type of product that I choose to collect. I guess it has to do with the value that I place on a product. If I believe that the product is worth collecting then I would collect it. What I mean by having value is not monetary value, it’s more akin to the sentimental value but not limited to my personal views. Such as my Wedgewood collection, the reason I collected Wedgewood products is because I felt that the history behind the company is valuable enough for me to collect.

EVOLVE: You have won numerous awards and titles such as winning ‘Guinness World Record’ twice for highest number of model cars, and titles as, ‘The King of Model Cars’, ‘The Five Million Dollar Man’, ‘The Pearl of UAE’, & ‘The Man Who Has Everything’, to name a few. Do you think you have accomplished everything or your journey is still on?

H.E. Mr. Suhail: I do not consider these awards and titles as a great defining achievement. Appearing in the Guinness World Record was a result of me perusing my hobby and nothing else. I did not set out to break a world record, it was not my goal to do so. In terms of the other accomplishment, it was manly for my country. I wanted to show the world that the UAE is capable and that I am proud to be an Emirati. On that note the journey is far from over

EVOLVE: You are also an eminent writer and authored many useful articles published in leading international magazines and newspapers in different languages i.e. Arabic, English, German, Russian, Urdu, Malayalam, Hindi, Georgian, Pashto, Sindhi and Armenian etc. What is the essence of your writings which made you so famous all over the world?

H.E. Mr. Suhail: The reason why my articles cover all these languages is because I do not want to exclude others. I believe that the more people can read about you, the more they will understand you. I want people to see eye to eye with me, and excluding others is not at all what I want. It is important to diversify your audience and readers, and also to know them. This will allow you to be more knowledgeable about the world; it helps you get out of your bubble.

EVOLVE: You are considered one of the most favorite personalities by the leading Car Brand Companies Internationally, and the first person to show the Maybach to Crown Prince of Abu Dhabi His Highness Sheikh Khalifa Bin Zayed Al Nahyan on June 15, 2011. Moreover, you were invited to speak at the Prestigious 125th Anniversary Celebration of Mercedes-Benz. Do you consider these distinctions your best achievements of your entire professional career?

H.E. Mr. Suhail: Yes, I do consider these achievements as part of my best achievements. It was a great honor to present the Maybach to the current president of the United Arab Emirates. Being personally invited as an honorary guest at the 125th anniversary of Mercedes-Benz was also honorable. Furthermore, my affiliation with the automotive industry was not limited to these two occasions. I was also invited to visit and have a personal tour of Porsche factory in Germany. Out of all those achievements, I still consider the achievement of presenting the Maybach to His Highness Sheikh Khalifa Bin Zayed Al Nahyan to be the greatest achievement.

EVOLVE: You have organized huge exhibitions about your collections since 2001 till 2011. Do you consider these exhibitions your main source of income or just a favorite hobby? Moreover, are there more exhibitions in the planning phase for near future?

EVOLVE: You have the honor of winning title of “AMBASSADOR AT LARGE” awarded by International Human Rights Commission for UAE. What areas of human development did you serve for achieving this distinction?

H.E. Mr. Suhail: The title of “AMBASSADOR AT LARGE” was given to me for the efforts in aiding the International Humans rights. As I previously stated the efforts and work of the Al Zarooni foundation is what led me to achieve this title.

EVOLVE: Dubai has set itself the goal of becoming the world’s smartest city by 2021. Do you consider it a primitive step which would eventually assemble tech-based businesses from around the world?

H.E. Mr. Suhail: The UAE in general is moving towards becoming a technological integrated country. It is in terms being of being technologically aware is quite a reasonable and impressive decision. Since the world is also moving towards integrating technology into every aspect of our lives it is a smart decision to be considered the tech hub of the world. I truly believe that the UAE will be the tech hub of the world.

EVOLVE: As an Entrepreneur, what areas of strategic development you are focusing on for strengthening bilateral relations between UAE and Pakistan and what are your views about investment opportunities for the masses of Pakistan in UAE?

H.E. Mr. Suhail: First of all, The UAE and Pakistan need to strengthen their relationship. This would create better opportunities for trade and investments between the two countries.

EVOLVE: What are your thoughts on print media around the globe and what would you like to say to the readers of Evolve Business Publication?

H.E. Mr. Suhail: For personal taste I prefer print media over digital media. Print media, in my opinion have less room for error when compared to its counterpart. I also prefer print media because I can collect historical events and add them to my collection.